I'm not some Science-Nazi, but yea, there is some impracticalities in space that ships should be able to overcome, mainly battleships, as most blockbusters depict, such as Star Trek - so we will be talking about that today... 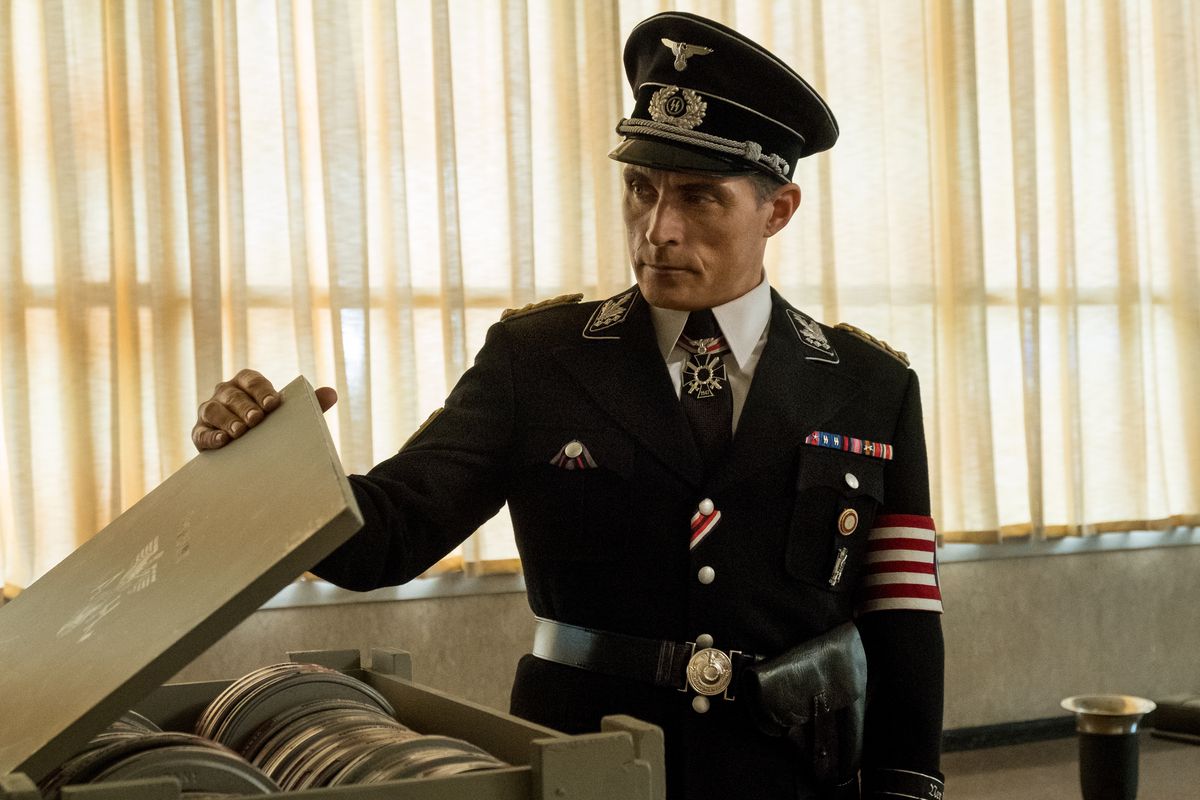 "Are you sure this design makes sense?"

Okay, as a good engineer would do, the problems we will face will shape our ship design along the way.

The first thing we should be concerned about space warfare is directionality.

Unless the ship is a heavy carrier that is planned to follow a well defined path through long distances, it should be able to maneuver in as many directions as possible in order to evade enemy fire or pursuit - so, big back facing engines OUT, they make up for a very easy and big fragile target, as well, it makes your ship's axis of rotation to be just into the engine, and unless all of your mass and cargo are located very close to the engine, that will put a large amount of stress onto unloaded parts of the structure and make the overall process of steering, hard and slow.

As an example of how this works, you could pick a plank and experiment with some weight on different locations, if the axis of rotation is closest if not just on the center of mass, so expect the cargo or the engine itself to be your axis of rotation in a ship.
Burning the engine at the just the right amount is a problem because you don't want your ship to turn too much while aiming or evading, so a board computer is just enough to make these calculations for the crew, when inserted the angle it needs to turn in each axis - manual steering would be highly reserved for tasks that need close visual contact.

SPACE IS NOT THE SEA

Rule 1
There is no water to counter your impulse, as well, each turn and maneuver might put your ship into an undesired course, for as slow as it may be, having your ship de-orbiting while you explore the ground is not cool.
Again, rear located propulsion is highly inefficient in doing that unless you dock vertically with your propulsion pointing at the surface of the planet or moon.
Having at least 6 rockets along the X and -X, Y and -Y, Z and -Z axis will grant your ship a minimum decent steering in any of the 3 axes.

The main axes of a cube

So far our ship would more likely look as compact as possible, like a sphere or cube, with free and stable movement.

Rule 2
Windows, are a weak spot, no matter what they're made of, what worries is not that they could break, is that they do expose the interior to dangerous radiation, as explained in FTL DEPICTION, near light-speed and faster-than-light travel expose the ship hull to dangerous UV, X-rays and Gamma radiation.
As well, in cruisers and aircraft carriers, is fairly natural that the majority of the crew do not see the sun for the entirety of the mission - nothing too strange so far.
So, little to no windows across the hull, if there is windows, make sure they are slim and can be shielded at any moment.

Rule 3
We don't need an external horizon sense, I mean - Up or Down sides of a ship, we would want to make it cylindrical or with as many symmetry axes as we can, to make steering and defense evenly possible.

Rule 4
Heat is a serious problem. On Earth, vehicles, weapons and people can exchange heat with the environment. In space, we need to deal with irradiation of heat, the ship needs to get rid of extra heat from it's functioning and exposure to the sun, the problem is to balance the compactness of space ship with the large area needed to irradiate it away at a decent rate.
The ISS uses several heat plates to irradiate waste heat energy away from the ship, so computers, and people inside work properly.

We may want to use plates or several fins to irradiate the heat away, and as we would want to move this ship around, it should be able to control how much of that is actually irradiating heat away as we wouldn't want to freeze beyond the frost line or cook around Mercury.
An array of fins that run a fluid like oil or water as medium to carry heat away like a freezer's heating coil. Or we could design some part of our hull entirely dedicated to heat irradiation using the same principle, though using it's surface to do it.

In this case, we could use heat against our enemies, lasers or weapons designed to induce heat onto the hull or critical points like life support systems, can cook their equipment down and even kill them inside without necessarily breaching through the ship.

For this, we would never want to coat our ship in black paint or use dark materials to construct it's hull. Make it visually as bright as possible is the way to go, or at least as reflexive into the UV and Infrared as possible.

For now, our ship might look like a plain white cube-sat, with large panels to irradiate heat.

Now, we can't scale up our ship and make it a white Borg Cube, it is a ridiculously large target.

We would need to reduce our ship's silhouette in order to make it difficult to shoot down, making it an elongated bar would do well, we have a small circular silhouette along one axis, and a relatively thin bar on the other two. 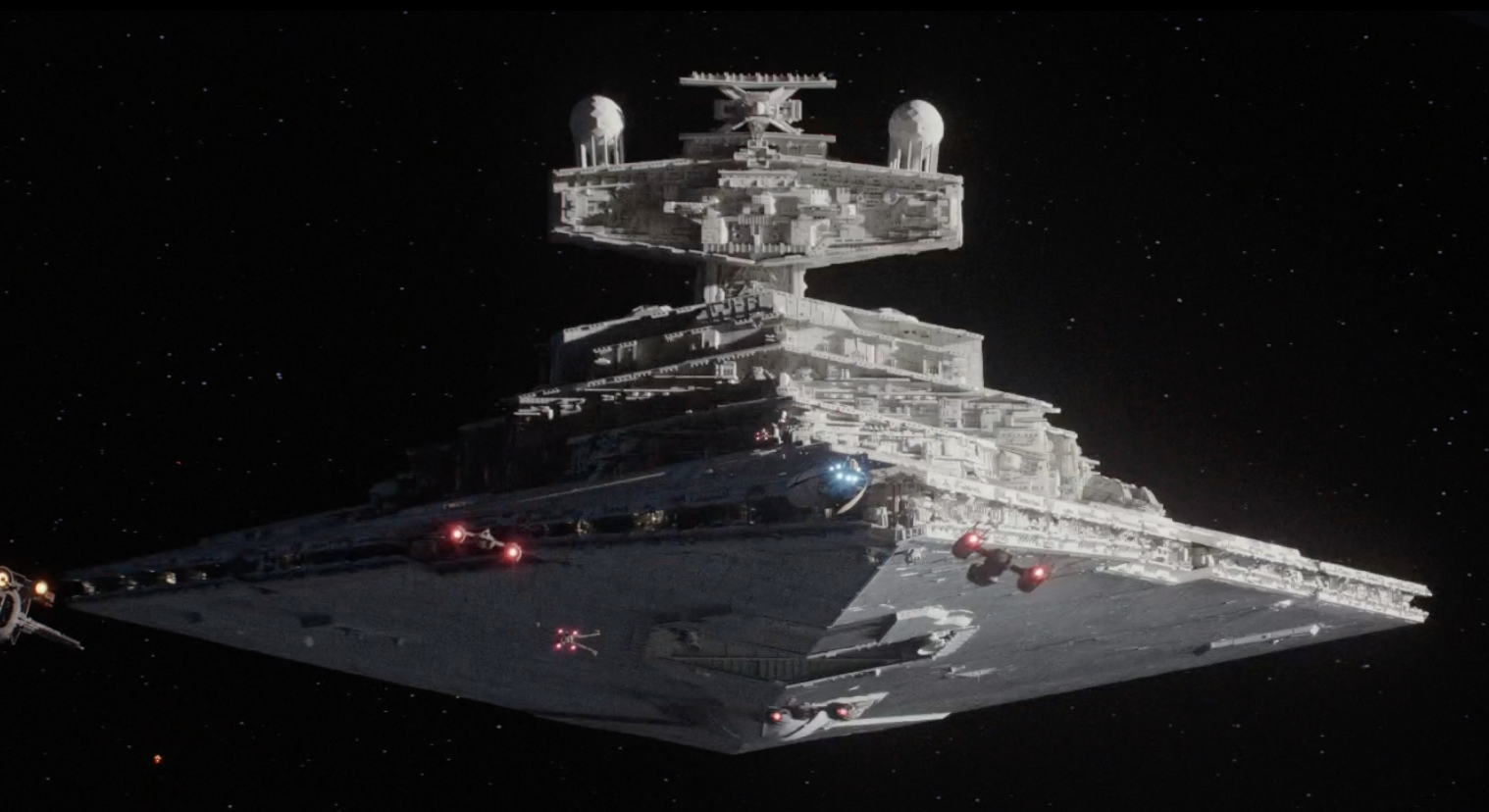 The ISD, checks for rule 4 only

SPACE WARFARE
We would probably want or need to engage our enemy from a fairly long range - a couple thousand kilometers, if not light-seconds away, so light-based weapons are ineffective, and sub-light projectiles can be tracked and counter-measured with a maneuver set.

In this case, to create an untraceable cloud of high velocity debris or projectiles is the most effective way to engage the enemy, basically, use a space-shotgun to create a cone of debris at a distance that is virtually impossible for them to evade.
If your enemy can travel sub-light at 8km/s, create a cone with a base radius of 9~10km on their end, so you still get a hit if they try to evade.
If they do that to us, the most efficient way to get over it would be to have a thick hull at the extremes of our ship and turn parallel to the firing direction minimizing our silhouette as the cone passes.

Another viable solution we can learn from WWII, inclined plane of armor, makes it's effective thickness increase, as well it decreases the probability of penetration by deflecting projectiles, this is efficient as long as the incoming fire is nearly parallel to plane of your plate - that is what makes high-ground fire and mortars a good weapon against tank armor since you're shooting where the armor is thinner.

So, some extra armor plating in some angle on the extremes and we can create a wide safe pocket behind our ship where debris and projectiles won't reach our fleet comrades.
On the side we can dedicate a central line of weapon bays and more plating on the upper and lower part of the line.

Again, a good steering capability is necessary to maintain your orientation parallel to the direction of fire. In this case, guided missiles or curved trajectory missiles (doesn't have a tracking system, it is made in such a way it does describe an arch in space within a certain range, if the target is too close or too far away it becomes rather useless) might be a good way to overcome your enemy maneuvering speed, again, that can be dealt with via anti-missile and turret systems - but that's defined by how good both attackers and defenders are on each (and who has more Plot Armor).

Space warfare would be boring and slow in ideal conditions (access to the same degree of equipment and strategy use):

Ships have no real reason to be within visual distances from one another, unless you want to worry about debris from nearby dead allies.

Scenes like this would be rare, and willing to be avoided by both sides

Being hundreds, thousands of kilometers or even light-seconds away from one another means that if you are able to even track your enemy, it is still a shoot and wait game.

For instance, if your artillery is 10x as fast as the WWII 40.6 cm SK C/34, ie, have a muzzle velocity between 8 and 10km/s, it would take 40~44 seconds to reach a target as distant as the ISS usually is from the ground (400km). What gives plenty of time for the enemy to react. Creative solutions such as dummy rockets or projectiles to accompany the real shell or radio / luminous flashbangs may come in hand.

Unless one or both sides have access to Relativistic Weapons - weapons that fire projectiles at near light-speed, and thus deliver ludicrous amounts of energy upon impact.

Here is a clear and more mathematical approach to:
Kinetic Energy of RW [LINK]
Relativistic projectiles and moving spaceships [LINK]
And the full playlist on Relativity [LINK]

Overall, your ship design might resemble some of Mark Poe's work, a fellow artist that allowed me to showcase his designs here, those pretty much follow along the guidelines established previously.

As, well I recommend visiting the YouTube channel Isaac Arthur for more in depth approach to science and futuristic topics.

DESCRIBE YOUR WORLD, WHAT RESOURCES ARE AVAILABLE FOR LIFE TO USE?  WARNING, THIS TOPIC IS VERY EXTENSIVE ! [and requires further study...

M.O. Valent
Hello visitors, I am M.O. Valent, a hobbyist science fiction writer, a great fan of modern poetry, space, synthwave, 90's music, and at moment also a chemical engineering student at the UFAM (Amazonas' Federal University). I am willing to pursue the greatness of science fiction classics like 2001: A Space Odyssey by Arthur C. Clarke, the Halo series and The War of the Worlds by H.G. Wells, and I believe someday in my life-time I will be able to see Half-Life chapter 3 be announced and to be recognized through my work.